I thought I knew what leadership was but at Masa’s Leadership Summit last week, I discovered I knew very little. I found myself asking, does she facilitate well? Is she the most vocal one in the room? Does she fearlessly share her opinions? Does she successfully include everyone? Often when we look to leaders we admire, we see the end result, but we don’t get to see their inner life. It is only in recognizing our own inner leadership capabilities that we can truly know what leadership is. 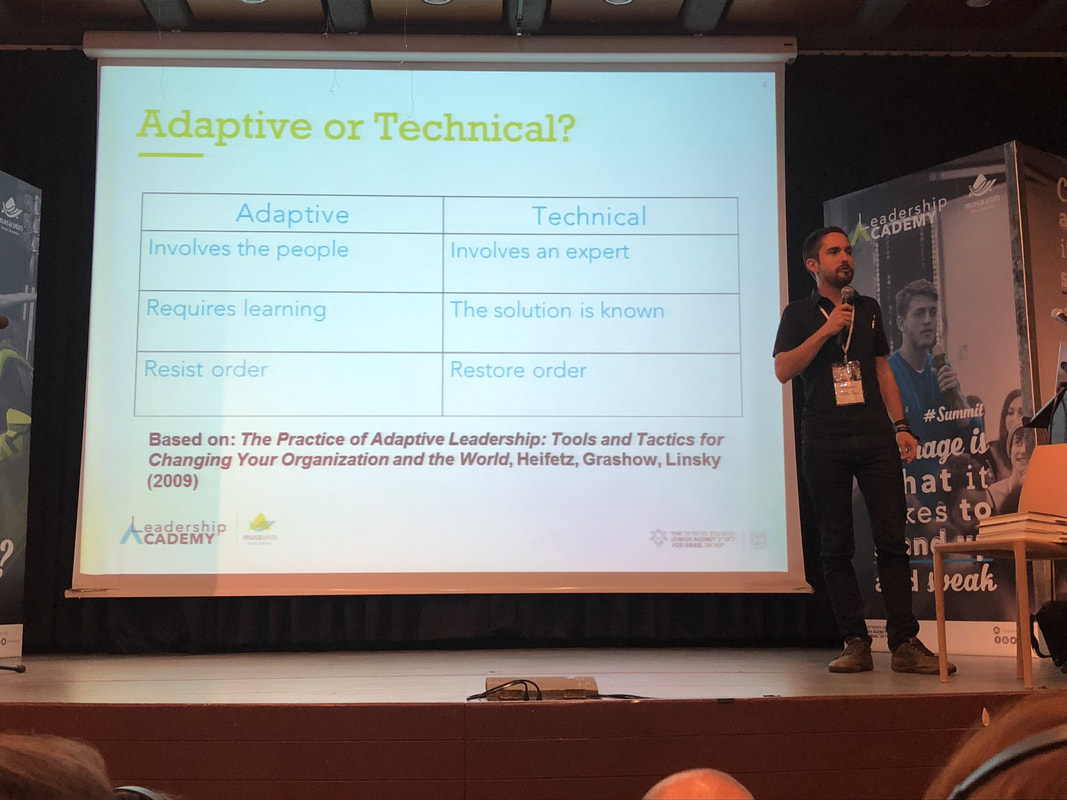 Ben, the program director, welcomed us and proceeded to ask us a vague question. There was silence because no one understood it. Ben then sat down on the stage and looked at us expectantly. After awhile, people began talking amongst themselves. It started hesitantly and then people became louder and louder until the entire auditorium was filled with people talking about how confused they were. Some people tried to unite the group through music. One guy stood up and sang “We Are the World.” Another started clapping and shouting “we will, we will rock you.” Whereas the people in close proximity to the brave ones joined in, those in the periphery remained out of sync with the rest of the group.

Our next activity was “Home Group.” These were 6 groups of 25 delegates and 1 facilitator. When we all sat down in a circle, we looked to our facilitator, Jason, for guidance and, again, he asked us a vague question and was silent. People in my group became very frustrated. Over the course of the next few days, many people stopped showing up because they didn’t like the lack of direction. However, I found the social experiment fascinating. Over the 5 days, we were forced to figure out what to do as a group in the absence of leadership. Moreover, we were encouraged to introspectively recognize our own roles and leadership styles in the group.

I have always wondered whether I am leader material since I feel more comfortable listening than talking. In class discussions, it’s usually the loudest and most opinionated voices that get heard. Moreover, in general I am careful about what I say because I try hard not to offend others. I also experience fear before I speak that what I say or do will not be accepted by the group, that it will be for nothing, or worse, people will think it’s stupid. Lastly, when I do have a useful comment or question, it often goes unsaid because I either do not want to disrupt the flow of the conversation or I worry I will be perceived in an unfavorable way. The conference addressed each of these concerns in various circumstances.

I had an amazing conversation with one of my colleagues in the home group. It is clear he is not afraid to talk in public and deemed himself the “most vocal one in the group.” I should note that that was not my perception at all. His contributions were always insightful and never seemed excessive. I’ve always admired people like him because they seem so confident. However, he said that he is self-conscious every time he speaks because he fears that others are thinking that he talks too much. We also described differences in our upbringing. In my family, I’m an only child and it is taboo in our household to interrupt or speak over each other in conversations. However, he is the youngest child of a large family and he grew up feeling like he had to speak loudly and often in order to be noticed. This conversation made me realize that many people (and perhaps everyone) have anxiety about speaking to a room full of people. Furthermore, maybe the right answer isn’t in talking the most, but finding a balance between listening and speaking.

I also learned a lot from Daphni Leaf, an Israeli social activist, on voicing my opinions. 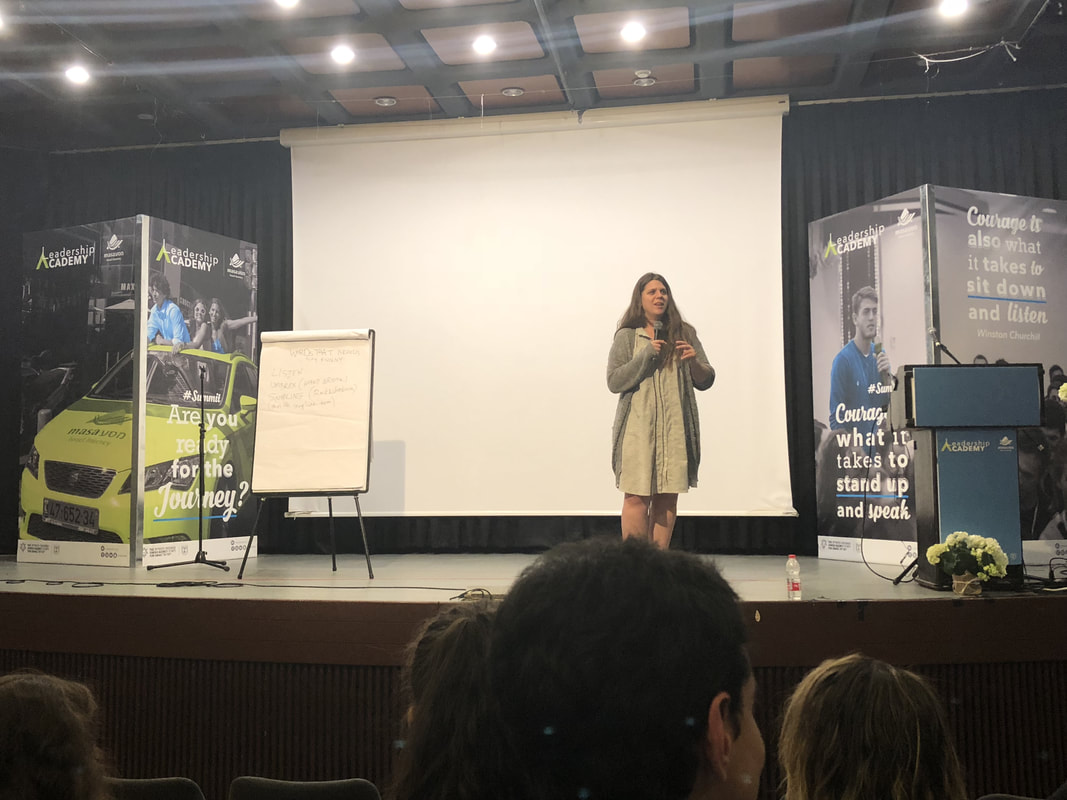 (The one and only Daphni Leaf)

She is widely known in Israel for initiating a movement protesting housing costs in Israel by pitching a tent on a crowded street of Tel Aviv. Soon after, she had thousands of people join her. The story Daphni told was unique not only in its substance, but also its delivery. Daphni did not paint herself as a hero, but as a failure who was driven by her circumstances to take drastic measures, which inadvertently spurred social change. She described herself as awkward, but I saw a huge amount of maturity in her because she was able to speak to us so truthfully about her life. In her, I saw the kind of leader I want to be: one who does not shy away from sharing my honest opinion. Here is an interview with her (not the one I saw but you’ll get the gist):

Another topic we were exposed to is “interventions.” These occur when you step in to change the direction of something. Some situations that I experienced interventions in were conversations, group discussions, and parties, but I’m sure they can be integrated on a much broader level. In group discussions, say the debate is veering off topic. You could say, “hey maybe we should get back on topic,” which would be an intervention. This action might not be accepted by everyone. Maybe the conversation will even get off topic again. You have the choice to keep intervening or do nothing.
The fear for me in intervening is that my idea will not get picked up. It can feel like a rejection. However, in one of the Plenaries, Ben said that sometimes you say or do something and it seems to have no effect, but maybe at least one person heard you. That is true for Ben’s comment; I heard him and it’s an idea that will stick with me. I experienced the other side of this during the Summit. I was talking with a peer in my Home Group and he mentioned that he was having a frustrating time figuring out his next steps. I painted him an image that always helps me: sometimes we try so hard to punch through the brick wall in front of us that we don’t realize we can just walk around it. He didn’t respond and I got the feeling that he wanted to change the subject.
However, the next day in Home Group, he mentioned a similar metaphor to the class. It’s possible that he had heard it before, but I’d like to think that I was the one who planted its seed. Sometimes interventions don’t work. For instance, the night I got back from the Summit, I had dinner at my friend’s apartment with two of our other friends. She cooked, so towards the end of the night I got up from our conversation and started to clean the dishes, hoping that they would join me and we could make a fun activity out of it. However, they did not and I washed all of the dishes by myself. Sometimes when you try something new, you fall flat on your face, but if the worst result is having to wash dishes, it is well worth the risk.
Lastly, I learned that leadership is about making choices.On three of the days, we had electives in which we split up into smaller groups to get specialized training. One of the electives involved a trip to Hebron in the West Bank to speak with a Jewish settler and a Palestinian who live there.
Of course, this was almost everybody’s first choice, but only 25 people could go. I was one of the ones who did not make it on the list. I was heartbroken since this had been a trip I was looking forward to since I found out it was part of the leadership summit. So many questions ran through my mind: Why was I not on the list? Did I do something wrong?
Is it because I was not talking enough? I decided to focus on next steps. I saw two options: I could decide to go with the flow and accept this other trip I was assigned to or I could be assertive by asking to go on the Hebron trip.
At the time, I tied these two choices to leadership and asked myself which was a better quality to have. I decided to go for assertiveness because you never know until you try. I asked Ben and he said there were no more spots, so that was that. A greater lesson I gained from this dilemma is that it doesn’t really matter which one you choose. Maybe there are some situations in which it is better to be assertive and maybe there are others in which it behooves you to go with the flow.
It’s about knowing when to use them that matters. This helped answer the questions I formed at the beginning and the ambiguous response is “it depends.” It can be an advantage to listen rather than talk because you can make everyone feel heard and appreciated. However, there are other times when it is necessary to voice your opinions. Similarly, sometimes it is best to let things go, but other times you can use negative events to create ideas that spur you to take action.
I want to thank Masa for providing this amazing experience. The director and facilitators created an environment of honesty that has encouraged me to speak more honestly in my personal life and in this blog. One unique aspect was that we were encouraged to confront the elephant in the room. For instance, one of my peers in Home Group was obviously not enjoying the Summit. She was on her phone the whole time and brought a negative attitude. Instead of ignoring it as me and my other classmates were inclined to do, our facilitator asked her questions that prompted her to share. She responded honestly, which resulted in a dissenting, but essential, opinion of the conference as a whole. This provided a unique social observation into how to spur conversations that address deeper meanings. That raw moment was only realized when she and the group were both willing to be their authentic selves. Over the course of the Summit, I redefined leadership: a great leader is someone who is so true to themselves that they set an example for others to do the same.
Read more in Miranda’s blog A Year In Israel

The Western Wall vs. The Berlin Wall: Where Should You Study Abroad?

People-watching at one of the many upbeat cafes in Berlin sure does seem exciting. That […]

3 Classes You Can’t Go Wrong with at Hebrew U