by Miranda Wall-Franklin, Tel Aviv University International MA in Conflict Resolution & Mediation
I had been to the Dead Sea on Birthright, but never this side of it. On Sunday, my Masters program had a trip to explore the environmental aspects of conflict resolution in Israel/Palestine.

First, we stopped at Lido Junction. Prior to 1967, this land was part of Jordan’s “West Bank” (and the name stuck). We explored the ruins of a once grand hotel. I could almost feel the happy energy of the families on vacation, hear the sounds associated with great food and conversation. This was the dining hall. 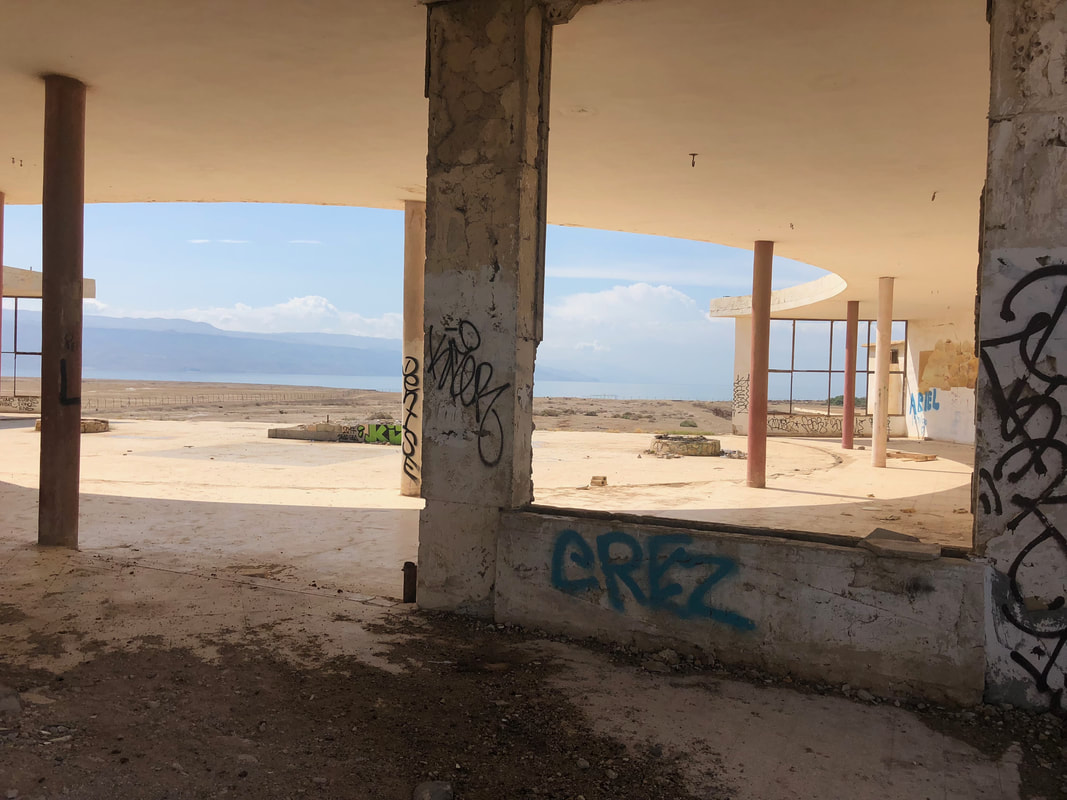 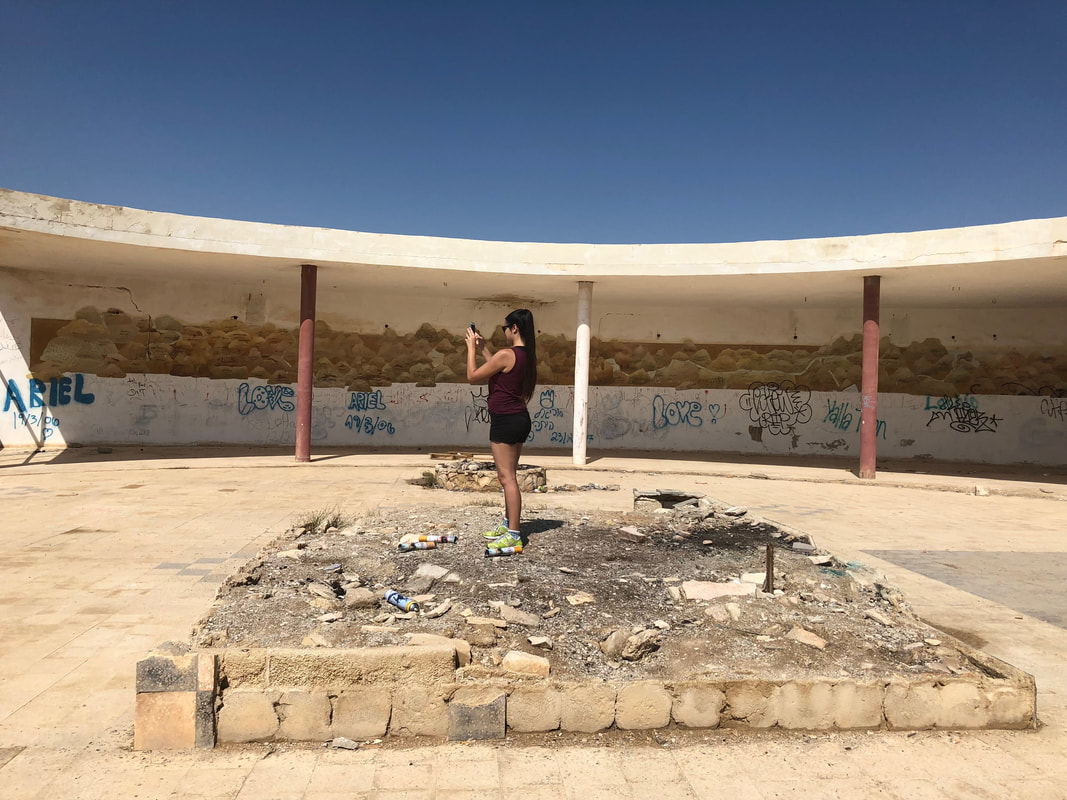 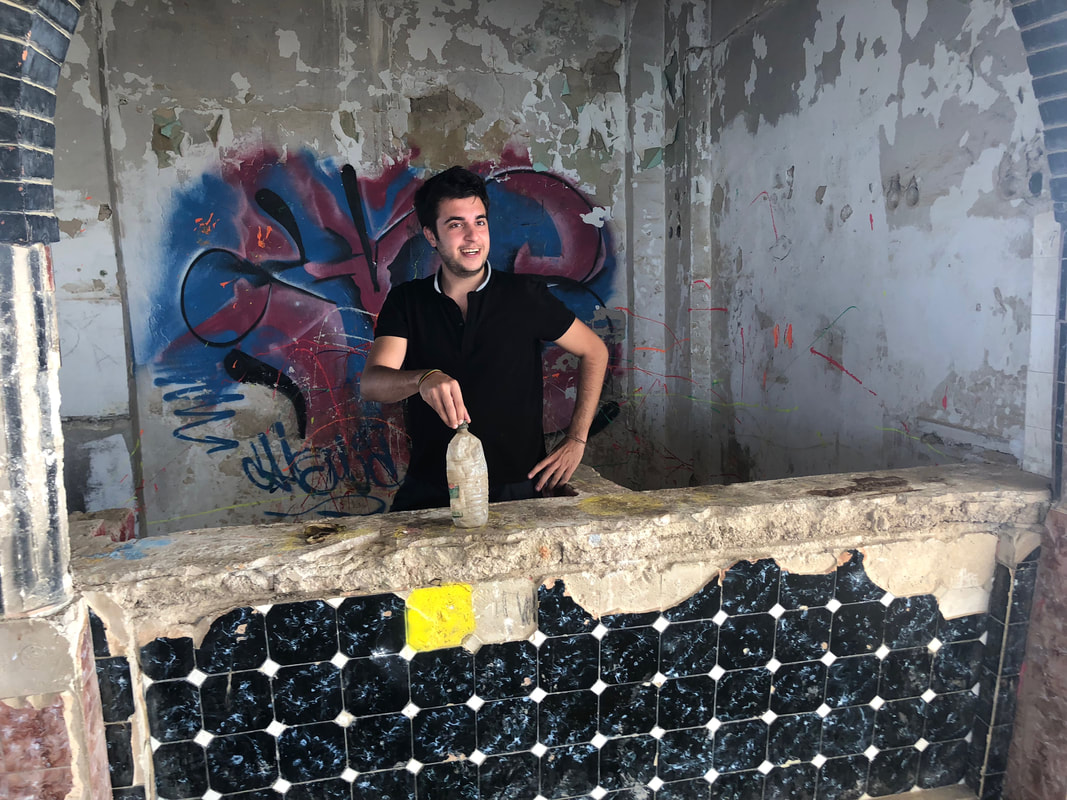 A window that overlooked the Dead Sea 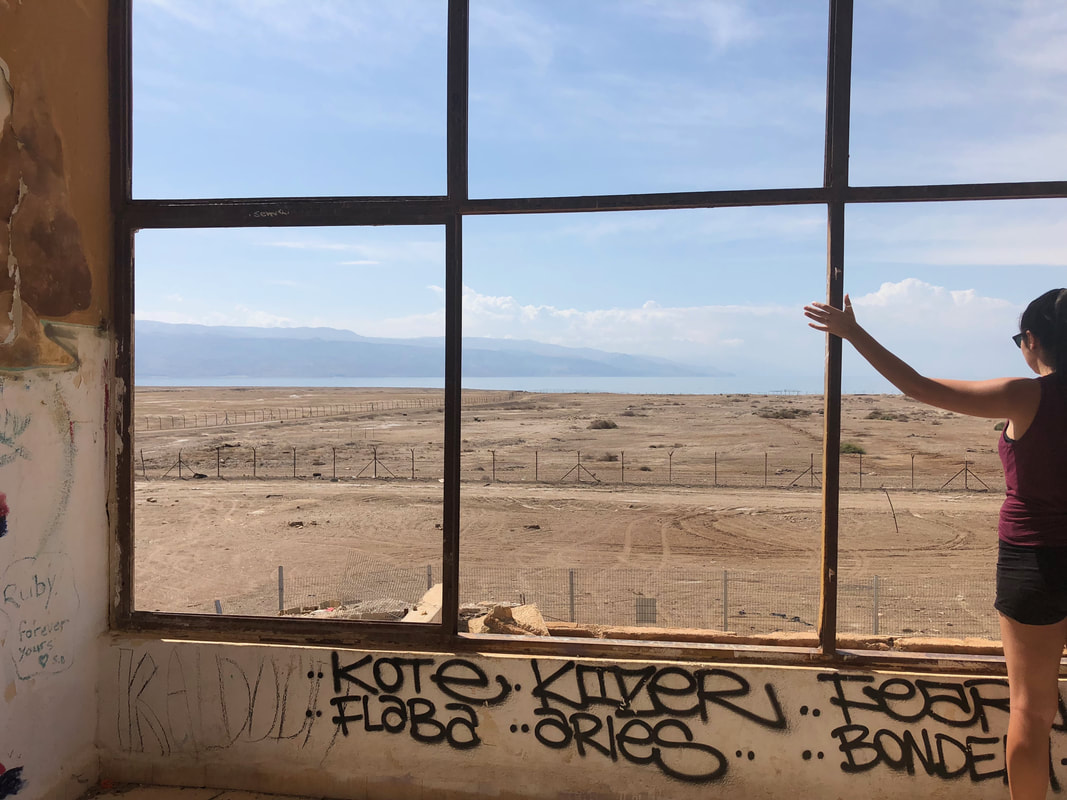 A hole in the wall with a view of an Israeli military base. Jordan is just on the other side of the Dead Sea. 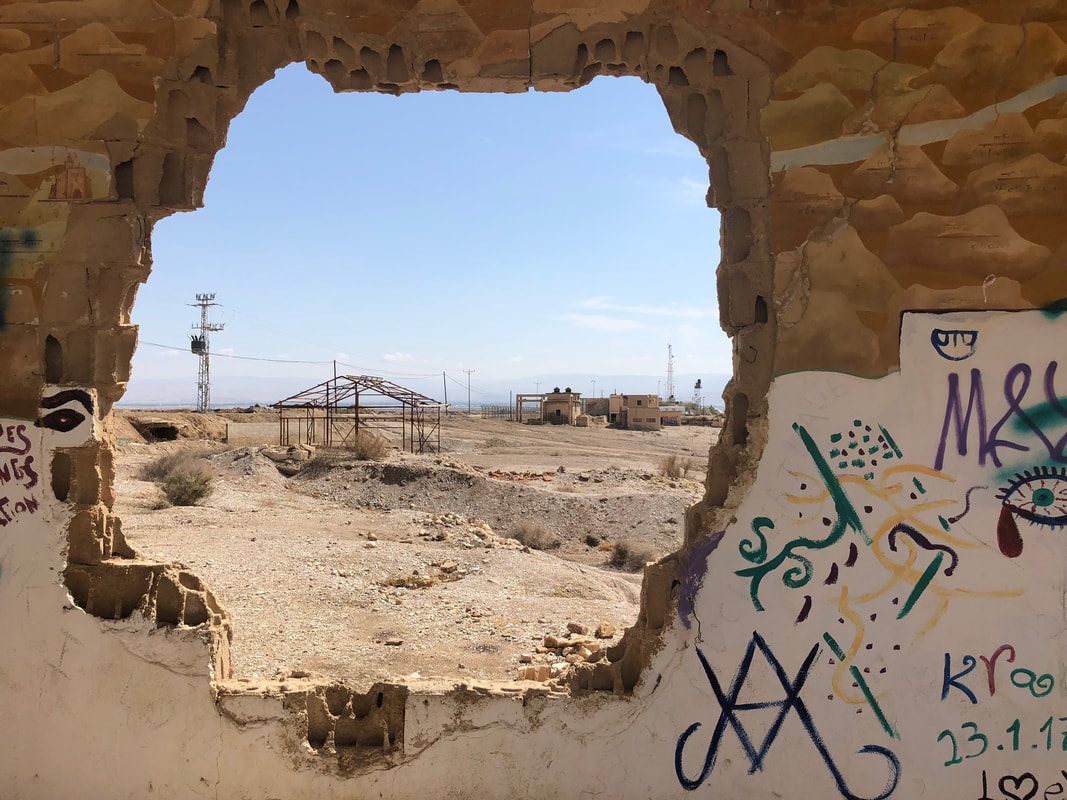 We came to this spot to see the condition of the Dead Sea today. This hotel used to be beachfront property; the water used to extend all the way up to the ledge. The water is receding at a very fast rate. 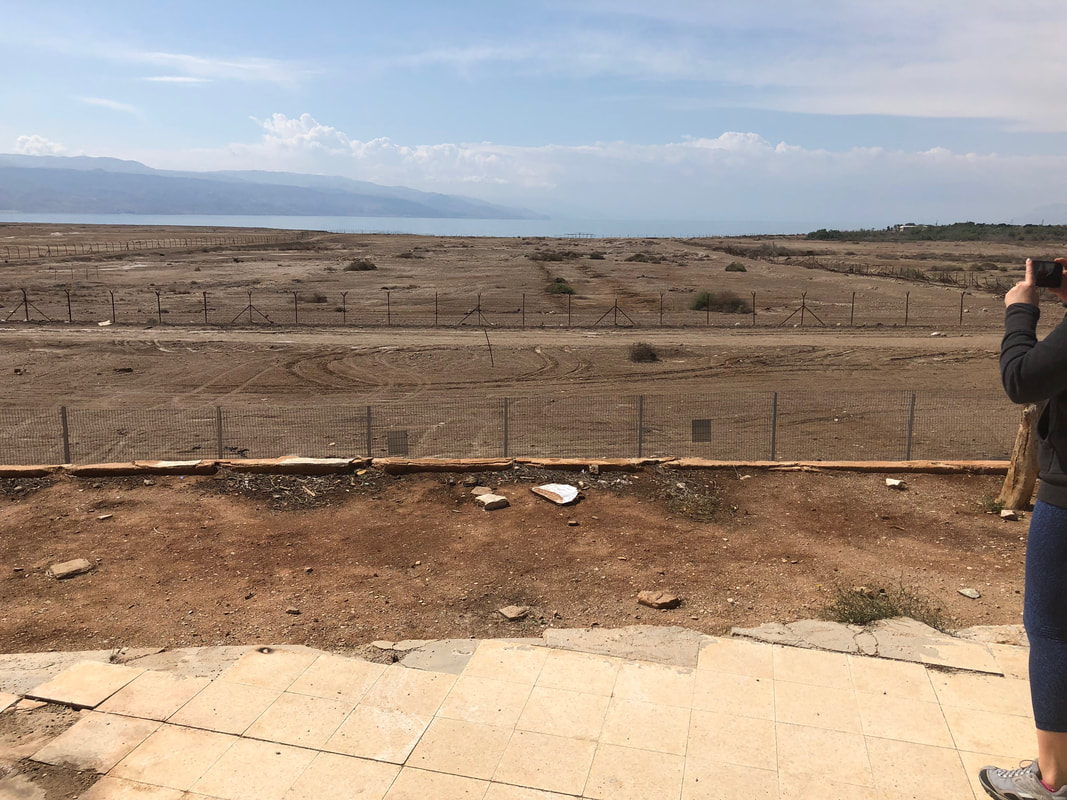 Leaving Lido Junction, we stopped at (what is now) the side of the road:
The sign describes a mark in the rock, made by British soldiers when they still occupied the territory. They rowed by in a boat and marked where the surface of the water met the rock formation. In other words, another clear indication of how much the Dead Sea has receded in the past 100 years.

The decreased salt water has had other negative impacts as well. The land surrounding the Dead Sea has seen an epidemic of sink holes in the past 10 years, shutting down all the businesses in the area. This is a result of dissolving bedrock made of salt due to changing levels of water that flow from the mountains into the Dead Sea. 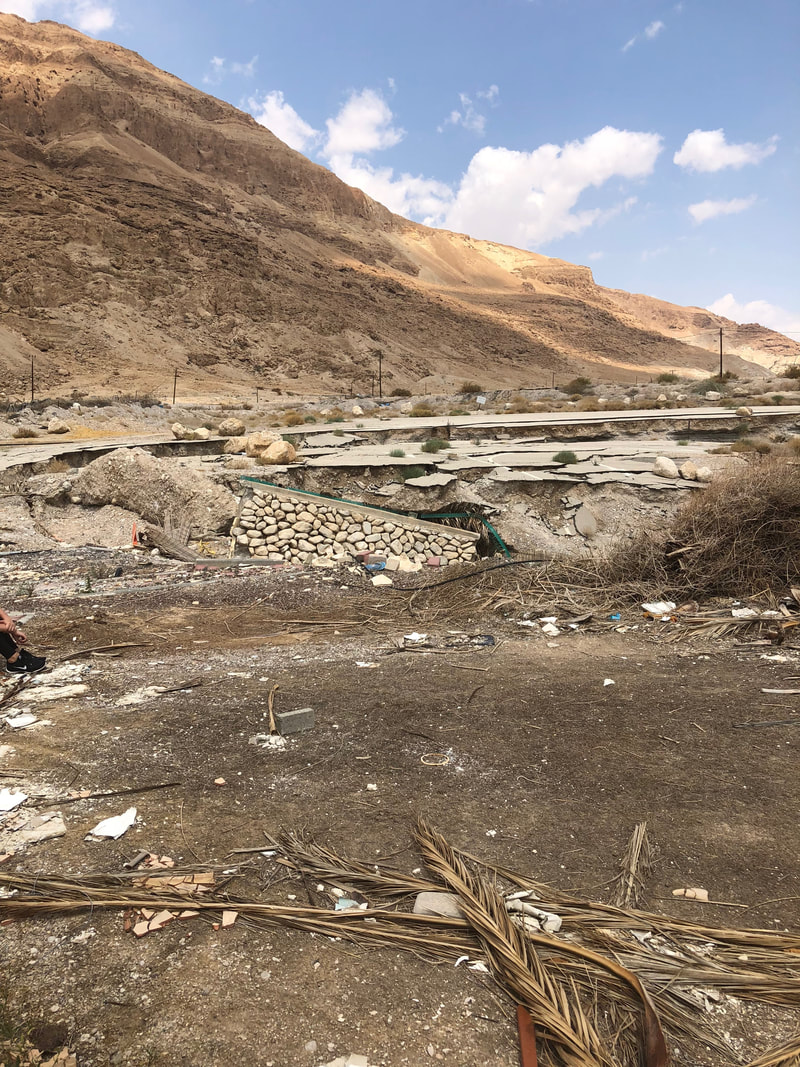 This was another beachfront hotel once. 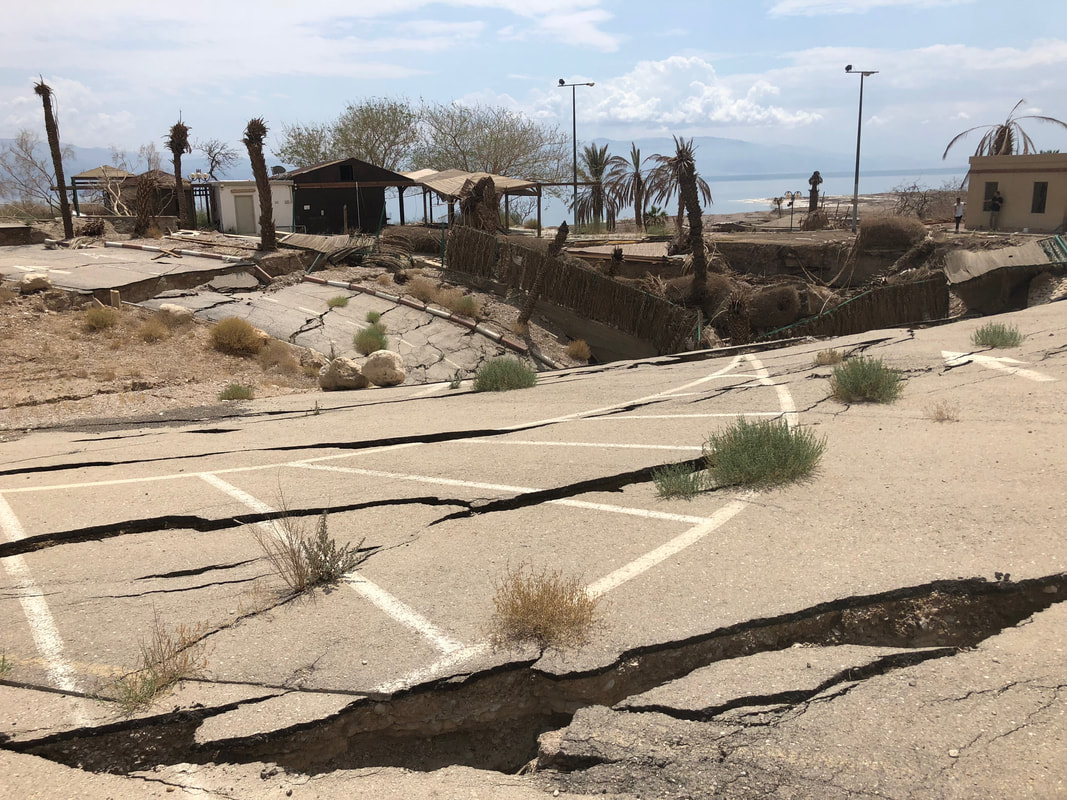 The entire parking lot caved in. 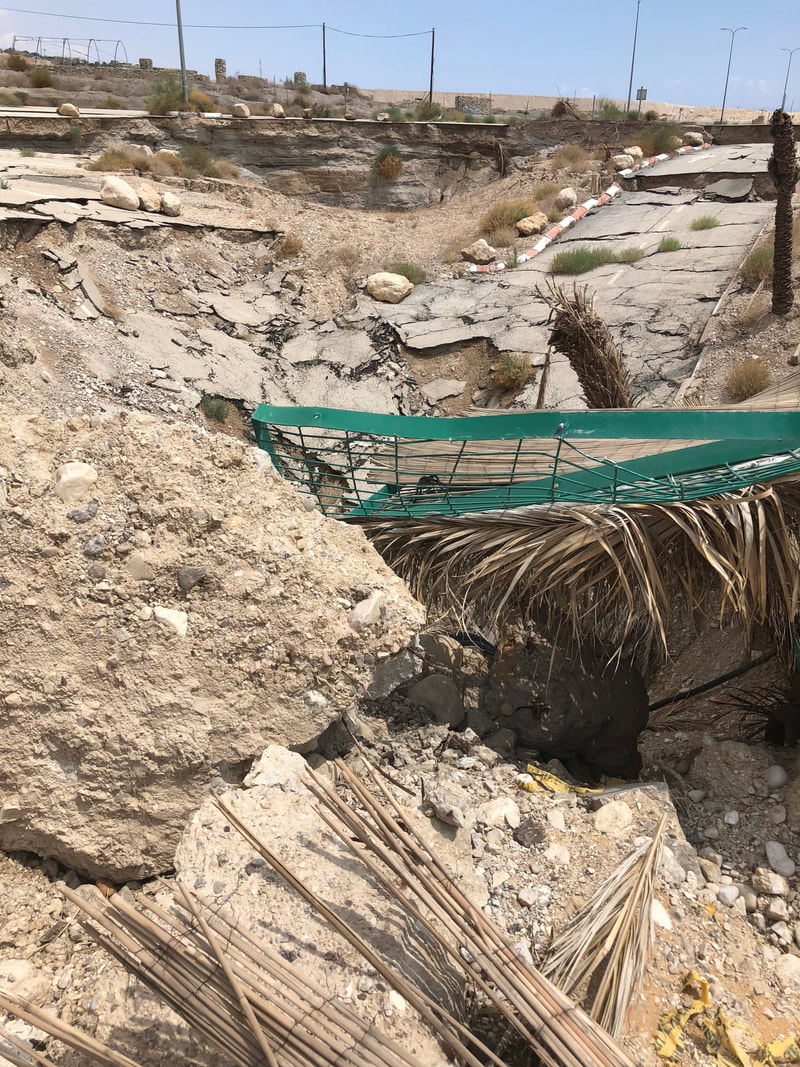 If you’re feeling depressed right now, don’t lose hope! Our environment professor said that the Dead Sea will not dry up completely because the salt slows down evaporation. Therefore, a solution is to add even more salt to the saltiest place on Earth. ​​Thus, the Red Sea-Dead Sea project was born. This would take water from the Red Sea, desalinize it, put the salt in the Dead Sea, and give the fresh water to Jordan, which doesn’t have enough water. On a practical level, the project would solve two problems at once and on a diplomatic level, this would build trust between the two governments. Unfortunately, the Red Sea-Dead Sea project will not happen anytime soon. It is estimated to cost $10 billion dollars and no one is sure how adding more salt will effect the make up of the Dead Sea. This creates hesitation from manufacturers who profit from the way the Dead Sea is now, such as Bromine deposits and other such minerals.
Read more in Miranda’s blog A Year In Israel

A Day in the Life: My Semester Abroad at the University of Haifa

By Brooke Gentry When I first told people I was going to study in Israel, […]

11 People You Must Meet While Studying Abroad in Israel

By Andria Kaplan Aylyarov Studying abroad in Israel is a magical time. It’s a wonderful […]