If you want to study abroad amongst ancient ruins and gorgeous people Rome might come to mind, but have you considered Jerusalem?
There’s no other place in the world where in the same day you can jog down 5,000 year-old-streets, sip cold brew on a rooftop, and awe at beautiful people, all while studying amongst the some of the brightest minds the world has to offer.
Here are 5 Reasons Studying Abroad in Jerusalem Trumps Rome:

Rome is home to 12 UNESCO World Heritage sites but Jerusalem is home to 5,000 years of West meets East plus World Heritage Sites. You’ll experience not only churches but also mosques and temples that date back to ancient times.

There’s no doubt that Romans are some of the most unique people in the world, whose hearts are bursting with a rich history, but would you rather have the chance to live with one cultural group or like a million. Wherever you walk in Jerusalem you’ll run into people from Armenia, Morocco, Poland, Hungary, Russia, France, Persia, Yemen and many, many more. If you’re the foodie type then you’ve probably already researched the top foods to eat in both cities. You’ve come across the renowned Jewish artichoke that can be found in Rome’s old Jewish ghetto. Yes, this tasty fried artichoke is nothing but mouthwatering deliciousness. But why eat a Jerusalem artichoke in Rome when you can eat them in Jerusalem.
We suggest trying the artichokes at:

Although the party scene might not be the first thing you think of when you hear the word Jerusalem, we beg you to differ. When the sunsets in the Holy City the vibe changes. Cafes turn into nightclubs and young people left and right are out and about. Rumor even has it one of the best bartenders in the world is now residing in Jerusalem,Kfir Bahar, the mad cocktail designer of The Great Gatsby Cocktail Room. 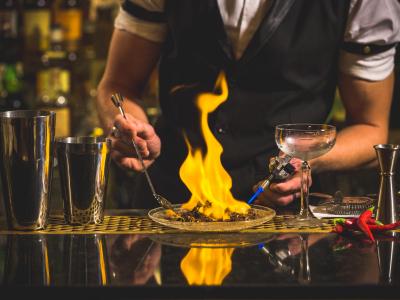 If you’ve done your research on Jerusalem then it’s no surprise to you that you don’t need to know Hebrew in order to have a great experience. English is the 3rd unofficial language of Israel and can be found on everything from street signs to menus. You will also find that nearly all of the population is fluent.

Ancient Greek Ruins Have Nothing On This